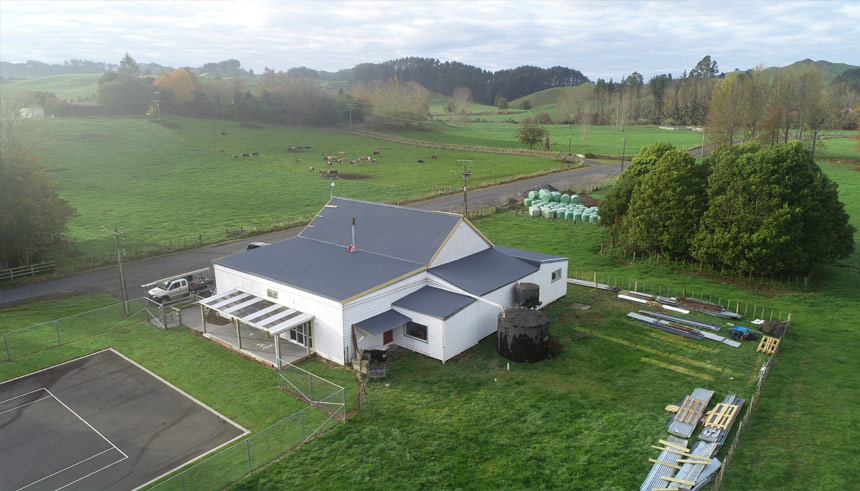 It is well known that New Zealanders give generously to worthy causes, although they don’t often talk about the near $3 billion a year they give to trusts, foundations and charities. Then there are smaller, locally-promoted fund-raising efforts in communities around the country. When the need arises, kiwis rally to support local causes – a great example of this generosity took place in the Taranaki settlement of Tarata, 18km inland from Inglewood.

A rural community of just 70 families, the residents of Tarata have demonstrated on many occasions their willingness to raise money for local causes – the latest being the need to re-roof the hall which had been leaking for over 20 years.

The hall was built in 1904; the tender accepted was for 159 pounds and ten shillings, later revised to 172 pounds. The timber was milled locally (red pine with matai flooring, totara piles and heart rimu in the roof structure). The hall opened in 1905 but since then extensions have been added in 1980, 1983 and 1986.

The hall is at the heart of the community and is the chosen venue for pot luck dinners, family celebrations, winter exercise groups. Women’s institute meetings and flower shows. However, ever since the early 1980s the hall has suffered from leaks related to an extension performed by locals.

Two years ago, a dedicated committee swung into action, their efforts so impressing NZMRM members, Pacific Coilcoaters and Roofing Industries, that an approach for assistance could not be ignored. 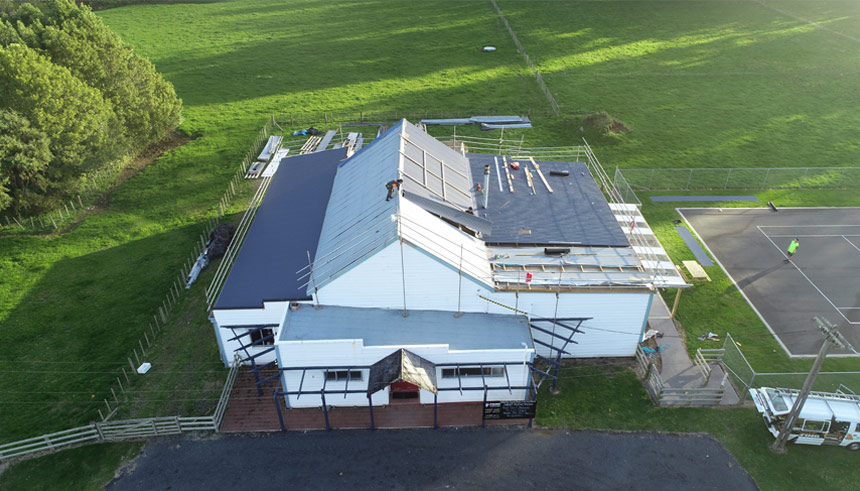 With $25k in the kitty, which included a grant of $4000 from New Plymouth District Council’s rural hall fund, the target for the likely cost of the re-roof of $60k still seemed a way off. Following a car rally this year, some discussions took place around how to achieve the re-roof and committee member Shelly Worthington contacted some rollformers. At some point the request filtered down to Steve Haines at PCC and then to Paul Ross at Roofing Industries who were “completely impressed” by the way this small, rural community had worked so hard to raise the dollars needed.

While continuously being approached to donate product from a variety of sources, both PCC and Roofing Industries judged the efforts of this small community to be exceptional. To this end, PCC donated coil and Roofing Industries Central Ltd rollformed the New Denim Blue ZinaCore .55 BMT True Oak Corrugate product for the roof, colour matched to the material used on the church roof.

Farnsworth Roofing, the chosen roofing contractor for the re-roof, also stepped up and discounted their contribution.

Seventy families live in Tarata, and over time with persistence they have actively raised funds to restore and re-roof the local church – completed in 2015 – before turning their efforts to raise money for the badly leaking hall. Events have ranged from an adventure race and a horse trek to selling ice blocks to 800 car enthusiasts during an American classic car event in February 2019. Perhaps their hardest endeavour was picking and selling over 2.6 tonnes of feijoas – picking every two days for six weeks.

The committee even managed to sell off some of the old roofing iron!