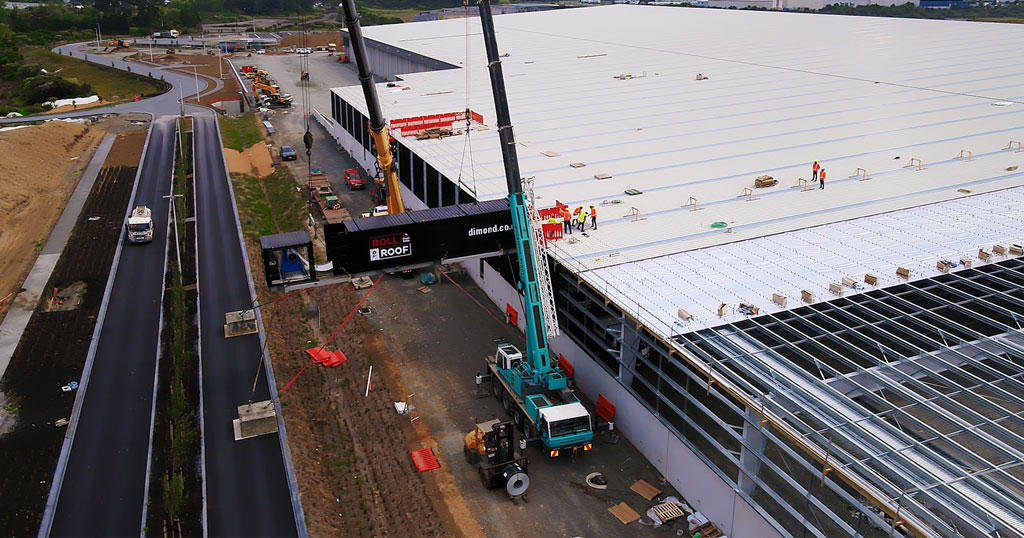 Installing NZ’s largest industrial roof presented its share of challenges, but that didn’t hold back the innovative Kiwi companies behind the project. Kiwi Roofing and Fletcher Steel’s Dimond Roofing came together and developed a novel approach that could change the way large-scale roofing projects are done.

The new Foodstuffs distribution center at The Landing Business Park in Auckland posed a challenge due to scale when it came to installation of the ColorCote MagnaFlow roof. At approximately nine rugby fields in size (77,500m2), the usual methods simply would not work.

Normally when installing a roof, sheets are rolled and shaped at ground level and then craned into place. But the 75-meter length of the sheets required for this large project prohibited use of the usual method. A significant amount of space would have to be dedicated to the roll forming machine and storage of the sheets before being lifted. Then there was the issue of transporting the sheets around the site and the size of cranes that would be required to lift them.

Safety concerns were first and foremost at every step. How were they going to manage to complete this immense roof?

Kiwi ingenuity at its finest

Discussions began between Kiwi Roofing, Dimond and Pacific Coilcoaters, about the process and equipment having to handle the biggest painted coil possible while ensuring safety and efficiency, both during manufacture at Pacific CoilCoaters and the installation. The result of their efforts: the ability to lift coils weighing up to six tons to roof height that could then produce a continuous formed sheet of roofing material up to 1300 metres long!

Jason Whiteman of Dimond Roofing says: “The system streamlines the two-step process of rolling and shaping the steel roof at ground level and craning it into place, into one continuous process that is completed on the roof. The system has never been used in New Zealand before and the companies involved wanted to try something innovative and the scale of this roof made the project a perfect pilot for the system.”

It took several meetings to come up with a design for the concept, with both roofing companies working together along with Auckland Cranes to design a feasible approach. The design was finalised by the engineers and while the platform was being built, Kiwi Roofing focused on the health and safety aspects of the never-before-used technique they were about to undertake.

Paul Connell, General Manager of Kiwi Roofing, says “Handling a 75m sheet safely requires a lot of physical labour which meant there were a lot of men and women on the roof who had no previous experience working at height. Mitigating any risks these individuals could potentially be exposed to was paramount to everyone involved.”

When given the green light to go ahead, an exclusion zone the size of an Olympic swimming pool was set up around the lift area. Two test lifts took place with multiple health and safety representatives from each stakeholder on site. Everyone tentatively watched and waited to see if what they were attempting would work. Imagine the excitement when the first run was a resounding success with no problems. Something that had never before been attempted was achieved that day.

Connell attributes the success to the intense planning and focus on safety. Working together, they overcame the challenge and developed a method that is not only safer but more cost-effective than previous methods. “We had a team of up to 15 installing the roof starting in July 2019 and finishing in March this year, the system proving to be safer and faster, saving an estimated two months’ time on installation,” he says.

The roof was installed while the building was under construction, as the method allowed the steel fabricator to work unimpeded by the roofing team. As soon as steel sections were available, they went to the roll to roof process, speeding up installation.

Overall, 108km of roll formed steel roofing was installed – over 1300 sheets of Titania-coloured ColorCote MagnaFlow. It was completed two months under schedule and was deemed safer than the usual method of craning roofing sheets into place. To add to that, Lindsay Rowles, General Manager of Membership and Property at Foodstuffs North Island says that “the new roof will serve as the foundation for New Zealand’s largest solar panel farm which is set to be installed later this year.”

The success of this project comes down to the collaboration of everyone involved and innovative thinking. The result is a faster, safer and more cost-effective method that surely has the potential to be applied to many New Zealand roofs in future.