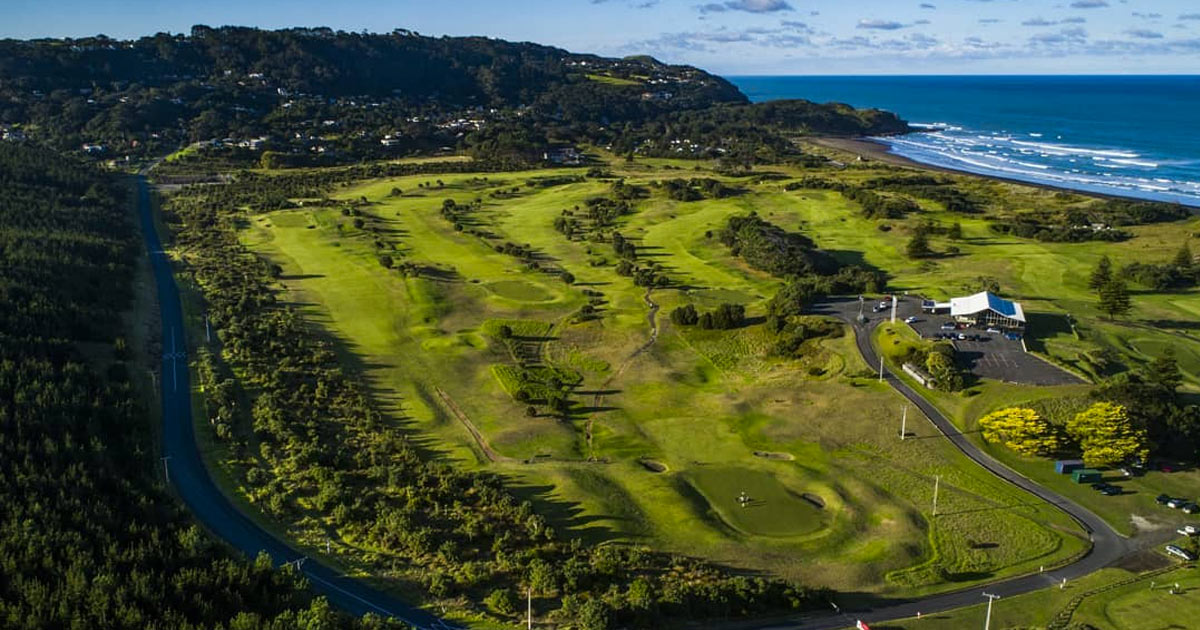 Sea breezes, roaring surf, the calling of birds – and the thwack of a club hitting a ball, sending it soaring through the azure sky far down the manicured green. Sweeping grand views of the Tasman Sea and Muriwai’s distinct black sand beaches offer a year-round paradise to play 18 holes, making Muriwai Golf Club one of the top-rated in the world.

Its coastal location also means it is subject to the whims of the weather, with prevailing westerly winds and a salty marine atmosphere. In April of 2018, the community of Muriwai would find out just how extreme the weather conditions could be.

A fierce storm ravages the community

The Clubhouse at Muriwai was set to get a new roof with installation due for completion on April 10, 2018 – the day before they would host the Autex Open Tournament. ColorCote donated all materials for the roof and selected the AlumiGard material to withstand the rigours of the coastal climate – sun, salt, humidity and high winds all contribute to corrosion.

Installation of the new roof was completed on schedule at 5pm. And at 10pm, a destructive Category 2 storm rolled in.

Severe winds had been predicted but no one expected the magnitude of what happened. Winds gusted up to 160km/hour accompanied by heavy rain. Homes in the area lost roofs and doors. Sheds were flattened. Trees fell blocking roads, taking down power lines, crushing cars and damaging buildings. Over 200,000 Auckland properties lost power for days. Elsewhere the country experienced tornadoes, flooding and snowstorms. The Insurance Council said it was the fifth biggest storm of the century, recording over $72 million in claims.

Muriwai was without power for 10 days and accessible only by four-wheel drive vehicles. Slips and flooding made it treacherous to get around. Neighbours banded together to share food and water and start the long clean-up.

Golf will go on

Muriwai Golf Club manager Andrew Jackson says it was “the worst storm in the club’s history.” The morning after the storm, he hopped in his four-wheel drive to get to the Club to assess the damage and cancel the tournament.

Trees were down across the course and the surface was covered with pine needles. The greens crew got to work straight away and cleaned up the damage from the storm within an impressive 24 hours. The Autex Open Tournament was back on, just one day late.

And the AlumiGard roof? It held on tight. It was incredibly fortunate that the new roof installation was completed before the storm, as the old roof would likely have sustained major damage – if it even stayed on – with costly destruction to the rest of the clubhouse.

“It still looks brand new now,” Andrew says, two and a half years later. The Gull Grey colour remains in excellent condition, proof of the ability of ColorCote’s paint system to take on the harshest weather. They went ahead and installed the same roof on the greenskeepers sheds, which is about the same size as the clubhouse.

The right roof for a severe environment

AlumiGard is made to withstand ‘very severe’ marine environments. It will resist corrosion for decades and will not rust. And its special coating retains paint colour and gloss.

All ColorCote products have to meet strict standards to ensure customers are getting the very best product for their needs. Lab tests subject the tested product to heat, impact, scratching and bending, to name a few. To further ensure they meet these standards, all products undergo a regime of “real world” tests.

The April 2018 storm provided a “real world” testimonial to AlumiGard’s durability and to the fact that the right ColorCote roof will always last longer.