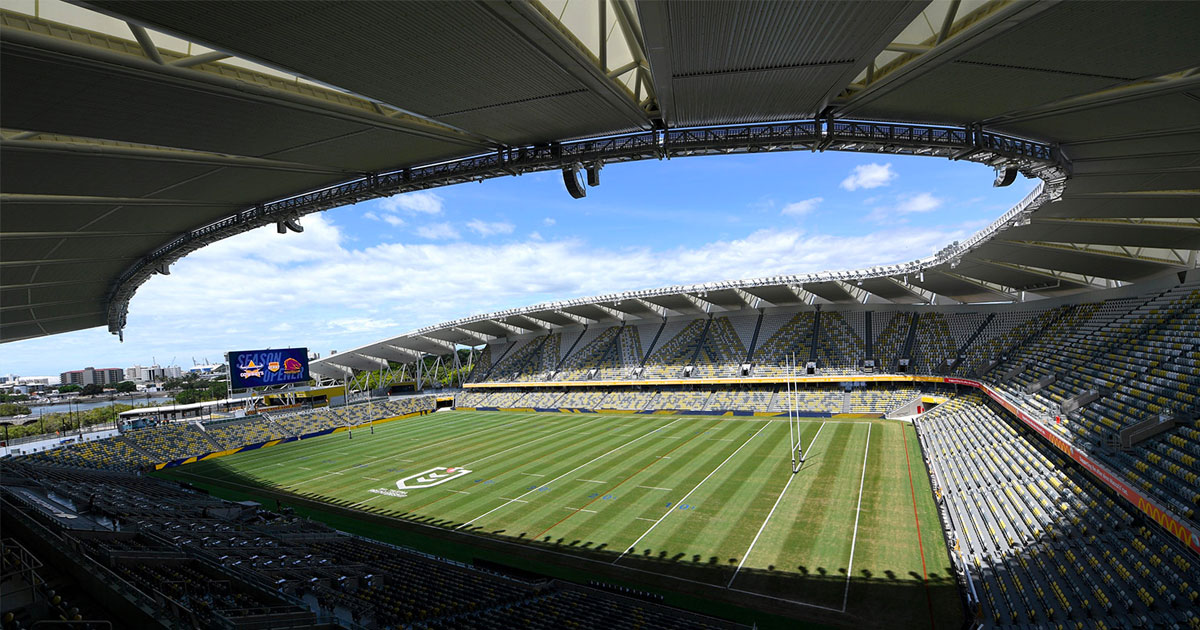 In 2015, the North Queensland Cowboys secured their first NRL premiership. With millions watching and Prime Minister Malcolm Turnbull onstage, Cowboys captain Jonathan Thurston used the opportunity to share his opinion that the Cowboys deserved a new stadium. The media took over, politicians promised funding, and plans were underway for what would be a $293 million project.

A project to restore the community

After the devastating floods in February 2019 which damaged 3300 homes and rendered half of those uninhabitable, the people of Townsville were experiencing the stress of recovering from a natural disaster. Excitement for the new stadium took hold with expectations that the new social and cultural hub would bring life to the city center. Uniting around a community effort was just what they needed.

“One in every 100 people who live in Townsville helped build this stadium,” said Sports Minister Mick de Brenni. A massive local effort, 85% of workers on site were North Queensland locals and almost 500 local businesses were involved in the supply chain.

Premier Annastacia Palaszczuk says the ‘world-class stadium was built by North Queenslanders for North Queenslanders.’ The local economy will surely benefit from the 25,000-seat international standard stadium as it brings people to the city. Pedestrian bridges provide easy walking to the stadium from the CBD through the heart of Townsville. Local businesses will benefit from the influx of people and the city’s heart will be reinvigorated.

The design brief for the stadium was to build ‘an expression of Tropical Queensland and North Queensland in particular.’ Cox Architecture developed a stunning horseshoe-shaped stadium that opened towards the city center, maintaining a close community feel with a view of the city.

The signature piece of architecture is the semi-open U-shaped roof inspired by the tropical pandanus plant. Commonly found on the coast and inland tropical Queensland, the native pandanus is a hardy tree, the leaves of which are used by the Aboriginal people to make clothing, hats, baskets and more. The long, tapered leaves inspired the roof’s geometry while aptly representing the robust spirit of Queensland.

More essential than its appearance, the roof had to stand up to cyclone winds and protect against Queensland’s intense heat. The roof provides shade for 75% of spectators while the open-air design allows the breeze to flow through. But Townsville wind loads are 50% higher than Brisbane and 100% higher than Sydney, so the roof structure needed to sustain the high wind and relentless heat, all the while maintaining the elegant design.

ColorCote’s premium roofing MagnaFlow was selected for the roof and canopies MagnaFlow uses the standard combination of zinc and aluminum, but with the addition of magnesium. Magnesium allows zinc to ‘migrate’ and seal cut edges, preventing exposure and subsequent corrosion. This unique MagnaFlow technology means the roof essentially heals its own cuts. This highly effective corrosion resistance is perfect for Townsville’s coastal location, year-round heat and cyclonic winds.

“MagnaFlow is ColorCote’s premium steel-based product, coated with a combination of Zinc & Aluminum, with the addition of magnesium, and is suitable for the more aggressive environments, particularly those near the coastline. This product is well established in New Zealand and this is definitely a landmark project to help raise its profile in Australia,” says ColorCote’s Sales & Marketing Manager Steve Haines. “The architect was looking to address the classic challenges around design with using a material that had the designed durability along with the pressures of cost control. Clearly, maintenance on such a large canopy presents challenges and the architect’s primary focus was getting a product that had high durability, while also being cost attractive.”

Putting Townsville on the map

While home to NRL’s North Queensland Cowboys, the venue is fit for hosting any number of events. Elton John opened the stadium with a sell-out ‘Farewell Tour’ concert in February 2020. One of Australia’s biggest boxing matches in years is scheduled for August 2020. The provision of multiple function rooms offers endless possibilities for various sized events in future.

The spectacular design and long-lasting roof will ensure a stunning-looking venue for years to come while providing a testament to the united community that rallied behind it.

“Every time I see it, it gives me goosebumps – it’s a world-class stadium,” says former Cowboys Captain and rugby great Jonathan Thurston.